The disease is transmitted through sporozoites injected by the female anopheline mosquito into skin capillaries, or through blood transfusion. Sporozoites (2) enter the liver parenchyma cells where they grow asexually by schizogony into the first generation of pre-erythrocytic schizonts (3). These give rise to thousands of cryptozoites (merozoites), which invade red blood cells by binding to ‘receptors’ on red cell membrane (Duffy blood group FyaFyb for P. vivax; glycophorin Β and C for P. falciparum), to develop into the asexual erythrocytic cycle (4). Some sporozoites P. vivax and P. ovale in the hepatocytes stay dormant (hypnozoite) to mature after an interval of weeks, months or even years into secondary exo-erythrocytic schizonts (3a, 3b). The successive waves of cryptozoites emerging from these give rise to relapse infections in the blood after months or years. Intraerythrocytic parasites, now named young trophozoites, acquire ring shapes and devour intracellular haemoglobin, excreting as they do so lumps of brownish ferrihaeme called malaria pigment or haemozoin or haematin. (Note: intracellular plasmodia protect themselves against free radical oxygen species released during haemozoin production by using host cell superoxide dismutase enzyme). The morphology of later blood stages differs from one species to another. As ring shaped trophozoites grow, they assume bulky or amoeboid shapes with enlarged chromatin mass (late trophozoites). The trophozoite nuclei undergo segmentation and division (schizogony or asexual erythrocytic cycle) to form multinucleated schizonts (early schizonts). Cytoplasm condenses around each doughter nucleus, as the schizont matures, to form late schizonts (mature schizonts) which contain well-formed merozoites. As the infected red cells disrupt, the cargo of 6 to 24 merozoites is now released to infect other red blood cells. Thus a new cycle of red cell infection and destruction is initiated. Some blood stages mature to form sexual forms, the macro (female) and micro (male) gametocytes (5). These enter the mosquito where the males exflagellate to fertilise the females (6). The ookinete thus produced forms oocysts on the outside of the midgut (7). Sporozoites develop in the oocysts (8,9). The sporozoites enter the mosquito salivary glands, where they are ready to infect a new host (2). P. falciparum and P. malaria do not form hypnozoites and stages 3a and 3b do not exist and true relapses do not occur. 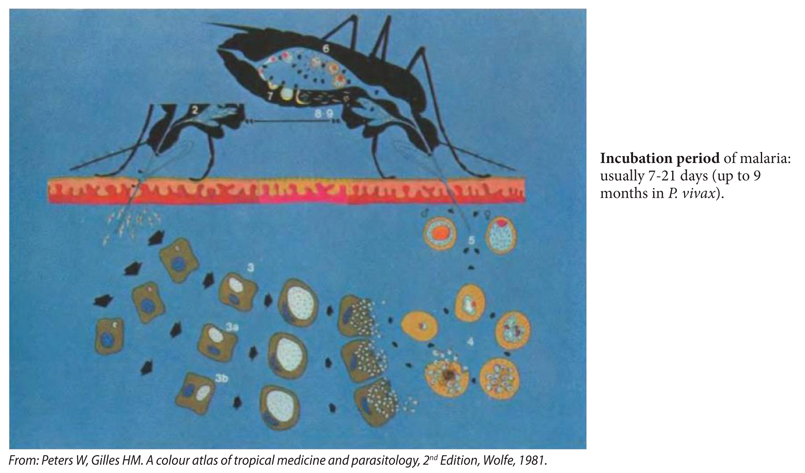 Recrudescence may occur in any type of malaria infection but true relapses occur only in tertian fever (P. vivax, P. ovale). Relapses develop from the persistence of sporozoites in the liver cells (hypnozoites). These dormant parasites may develop into tissue schizonts (reactivate) over a period of time ranging from a few months up to five years since initial infection, and the schizonts provide a source of new merozoites to re-invade red blood cells. The mechanisms that trigger hypnozoite reactivation and relapse of malaria are unknown but in some cases this follows a viral or microbial infection. The hypnozoites are also responsible for the long incubation period of tertian malaria (up to 9 months after the bite of anopheles in an endemic area) e.g. an infection contracted in the fall does not produce initial symptoms until the following spring, 7-9 months later.

In spite of intensive control measures over the past 50 years, malaria is still widely distributed in the tropics and subtropics (nearly half of the global population lives in endemic regions, and ~47% of the world’s countries have a malaria problem). The breakdown of large scale vector control operations and the emergence of multiple drug resistance in some of the parasites has led to an increase in the incidence of malaria in some regions. 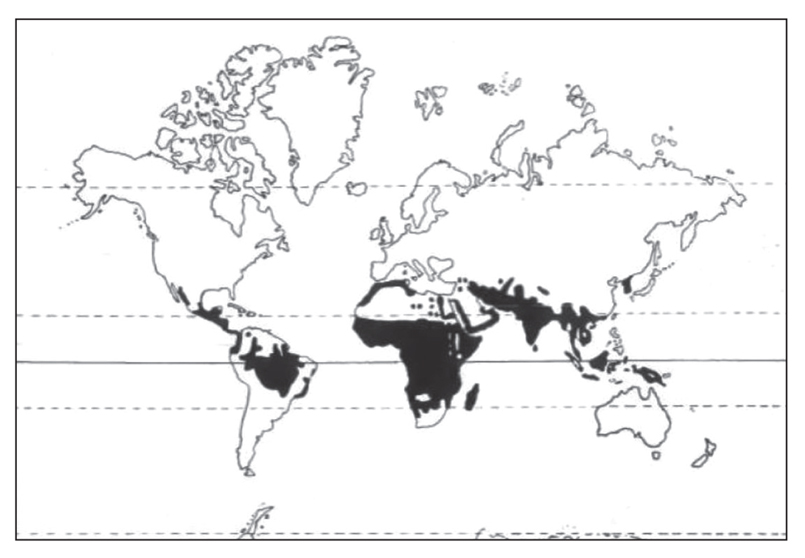 There are 420 species of anopheles mosquito, of these 40 are malaria vectors. Anopheles gambiae is the most dangerous malaria vector in tropical Africa.

The typical clinical picture is paroxysmal rigor-fever-sweats, splenomegaly and hepatomegaly (due to hypertrophy of the reticuloendothelial system). Malaria is classified as:

The most common species are P. falciparum and P. vivax. Travel history and epidemiology offer useful clues to diagnosis: 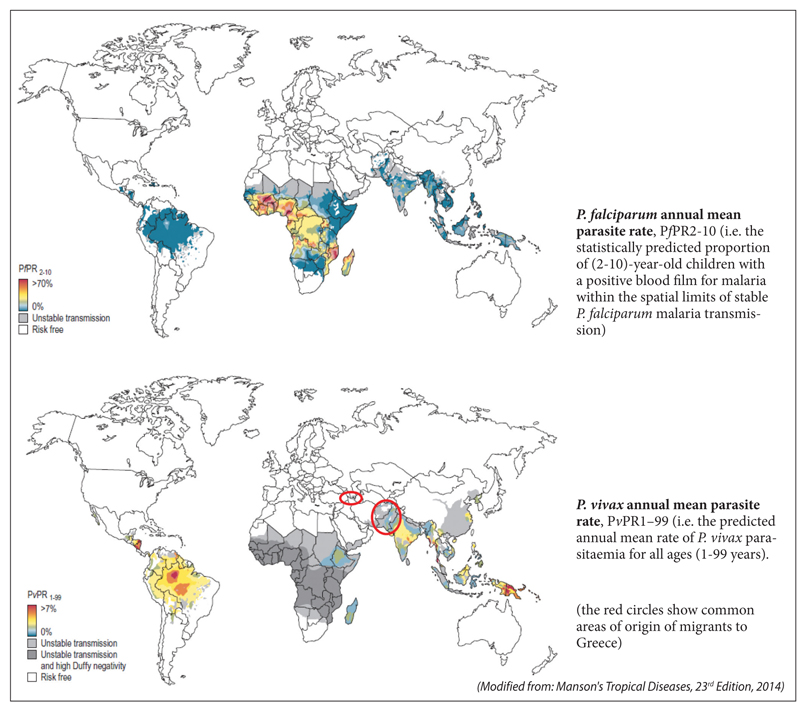 The characteristic immunological response in malaria is an increase in the IgG level. Cellular immunity also plays a role (Th1 responses e.g. INFγ).

HIV infection (common in migrants from sub-Saharan Africa with malaria) and iatrogenic immunosuppression do not predispose to malaria, do not increase the severity of malaria, and they are not associated with failure of antimalarial treatment (although more delayed clearance of the parasite may be observed). Malaria is not an opportunistic infection.

Remember: malaria and babesiosis can cause extreme parasitaemia and fatal haemolytic anaemia in hyposplenic individuals.

Individuals (>5 years old) living for a long time continuously in area of high endemicity or migrants originating from areas of high endemicity may have become semi-immune to malaria, and thus may have low-grade P. falciparum parasitaemia without fever or complications (i.e. asymptomatic infection) or an atypical clinical picture (e.g. unexpected identification of P. falciparum in the blood film of a migrant from Senegal without fever). In such cases, it is possible that fever may not be due to malaria, even though rare malaria parasites were found in the blood film! It has been reported that high levels of PfHRP-2 protein in plasma and fundal changes (e.g. Roth spots and exudates) may differentiate between severe malaria and other serious conditions with intercurrent parasitaemia (῾random᾿ parasitaemia).

Delays in the diagnosis of malaria often occur due to the diagnosis not being considered promptly; non-specific laboratory clues include elevated LDH, presence of atypical lymphocytes, elevated AST, and thrombocytopenia (present in 60‒80% of cases).

The differential diagnosis of fever without focal signs in returning travellers and migrants should include:

Typhoid fever (enteric fever) has the same geographical distribution with P. falciparum and, like malaria, typhoid fever can present with persistent fever, frontal headache, splenomegaly, and abdominal pain or abdominal tenderness (diffuse or right-upper quadrant); a dry cough is also common. Typhoid fever is frequently accompanied by leukopenia and eosinopenia. Generalised lymphadenopathy is uncommon in typhoid.

Dengue concerns travellers to South-East Asia (e.g. Singapore, Hong Kong), India, and the Caribbean (Figure S5). Unlike malaria, dengue frequently presents with an erythematous generalised rash and a large number of atypical (reactive) lymphocytes in the blood film (ddx: infectious mononucleosis). Arthralgia, headache, and thrombocytopenia are very common; thrombocytopenia may be severe in dengue haemorrhagic fever (DHF). Unlike malaria there is no jaundice in dengue (even in DHF). In uncomplicated dengue, CRP is typically normal. In contrast, CRP may be increased in malaria. Headache (retro-orbital), generalised lymphadenopathy and/or splenomegaly may be present.

Tips:
– in every patient who returns from the tropics with fever, regardless of the clinical symptoms or signs you should rule out malaria (P. falciparum may manifest as acute febrile gastroenteritis, traveller’s diarrhoea, atypical abdominal pain and fever, dry cough and fever, severe headache and fever, flu-like syndrome, or severe sepsis/septic shock). Arthralgia, myalgia, and nausea are very common symptoms of malaria.
– malaria does not cause any lymphadenopathy or rash.
– travellers who develop a fever >7-10 days after their return are unlikely to have dengue or chikungunya fever but they may have malaria.