In this issue of HAEMA Bitsani et al have unravelled the landscape of IDH mutations in 126 newly diagnosed AML patients treated in a large University tertiary referral centre of Athens, Greece between 1995 and 2010.1

It is well known that the discovery of the underlying molecular landscape in AML has pioneered the evolution of treatment paradigm and prognosis in these patients2 and allowed the implementation of MRD techniques to facilitate treatment deescalation or further escalation via the graft versus leukaemia platform of allogeneic stem cell transplantation. In line with the sequencing of the first AML genome in 2008, the discovery of isocitrate dehydrogenase (IDH) mutations in AML was first described3 (Figure 1). 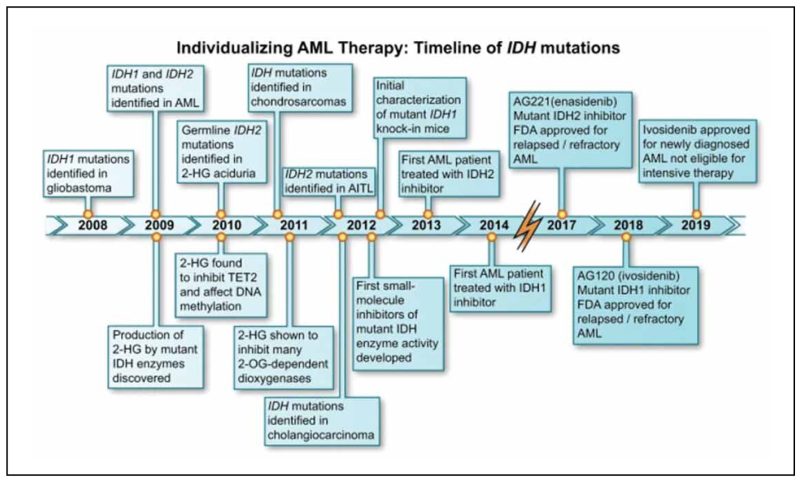 In this highly important retrospective study by Bitsani et al, the first one looking at the specific IDH mutations within the Greek AML population, it was concluded that the total patients exhibiting IDH mutations were 13,5% with actual frequency of 4.8% for for IDH1 and 7.1% IDH2 while 1.6% of patients had both IDH1 and IDH2 mutations. Τhese data are comparable to the international published evidence (15-20% of all AML patients having IDH1/2 mutations).4

However a pivotal finding concurrent to other international studies was that IDH mutations, identified in 17 patients in total, were associated with the NPM1 mutations (10 out of 39 NPM1 mutated patients) rather than with Flt-3 ITD (3 out of 24) which might be able to confer a more favourable outcome in the absence of other poor risk cytogenetics or concomitant high risk mutations.5 The presence of NPM1 mutations and Flt-3 ITD mutations reported by the authors in the cohort of newly diagnosed AML patients were totally comparable to the recent study by Middeke et al6 having 33% and 22% of the above mutations respectively in 4930 patients. The commonest mutations in IDH1 and IDH2 occur at conserved arginine residues within the enzymatic active site, specifically the R132 locus of IDH1, and the R140 or (less commonly) the R172 locus of IDH27. This was also the finding reported by Bitsani et al with the R132 mutation and R140 mutations being the commonest in IDH1 and IDH2 mutated Greek AML patients respectively.

It is well known that AML patients might harbour more than one mutation and the prognostic impact of the presence of IDH mutations may be influenced by the co-mutational status, and the specific cytogenetic mutations8,9. Within this cohort of patients analysed by Bitsani et al almost half of the patients had normal cytogenetics in line with the published evidence from Pascha et al10 while the rest of them had other karyotypic abnormalities. It is largely unknown whether IDH mutated AML patients should be consolidated by hematopoietic stem cell transplantation (HSCT) as a result of the IDH mutations and this was not studied in the paper. It is also important to understand whether there is a difference in outcomes mainly CR ratesoverall survival (OS) and relapse free survival (RFS) between IDH1 and IDH2 mutated patients. The impact of IDH mutations on AML prognosis remains somewhat controversial, although there is some evidence that IDH1 mutations carry a worse prognosis but a relatively favorable prognosis may be seen with IDH2 mutations, particularly R172K IDH2 mutations within the ELN adverse risk group patients, in the setting of standard intensive chemotherapy.11,12,13

The authors have confirmed the statistically significant RFS superiority of IDH2 mutations compared to IDH1 but it didn’t translate to an overall survival advantage to the patients. There was no subanalysis of the different mutations in order to see whether the R172 IDH2 mutated patients contributed to better outcomes in IDH2 patients and the authors did not find any correlation of the presence of IDH mutations in specific ELN AML risk groups. Knowing that mutations at the hotspots IDH1 codon R132, IDH2 codon R140, and IDH2 codon R172 do share the common functional consequence of increased 2-hydroxyglutarate (2-HG) production, they appear to have a significant difference in their biologic expression (13). Within the retrospective study by Bitsiani et al there weren’t enough patients to conclude about this particular IDH2 mutation outcomes in AML patients.

It is of primary importance the fact that Bitsani et al have identified that patients with IDH mutations were not at significant risk of death during induction as it was previously thought to be the case when these mutations were first identified and induction remission protocols do carry a significant risk of mortality. The patients presented in the paper by Bitsani et al are patients who did not have the option to be treated with novel treatment approaches like azacitidine and venetoclax or IDH1/IDH2 inhibitors since the treatment was administered between 1995 and 2010 and therefore there wasn’t an option to compare novel treatment options to standard treatment and conclude, albeit retrospectively, on the efficacy of novel therapies on CR rates, RFS and OS in this population of patients.

The evolution of molecular landscape which included IDH mutations facilitated the development of inhibitors like ivosidenib and enasidenib currently being studied in phase 3 clinical trials to evaluate the outcomes of patients with different IDH1/2 mutations (Figure 1).14

Moreover, in older patients with AML ineligible for intensive chemotherapy, IDH mutational status has an impact on response to therapy with hypomethylating agents (HMAs) and/or the BCL2 inhibitor venetoclax. Regarding venetoclax, as a single agent or in combination with HMAs, several recent studies found significantly improved response rates and OS in older patients with AML harbouring IDH1/2 mutations, with IDH1 mutated patients experiencing a CR/CRh of 59.4% and median DOR of 29.6 months, with a median OS of 17.5 months. Patients with IDH2 mutations experienced a CR/CRh of 79.6% with both a median DOR and median OS that had not yet been reached, with a 12-month OS of 75%.15-19

It also remains the question of which patients with IDH1 or IDH2 mutations who otherwise fulfil the fitness criteria to proceed with a bone marrow transplant will actually need to embark on this intensive option. Within this setting the future implementation of MRD might be able to define the optimal treatment route both in the induction setting and any potential intensification.

The study of Bitsani et al also shows the importance of the haematology laboratory and biobanking in identifying different cohorts of patients with AML and form the molecular landscape of the Greek AML patients in order to facilitate the best treatment choice for the patients and define patterns of novel therapy and laboratory reimbursement by the healthcare commissioning group. It will also be paramount in studying the molecular kinetics of relapse in the future for patients who exhibit IDH1/2 or other mutations.