Despite the excellent long-term outcome of patients with Hodgkin Lymphoma (HL), a minority of patients experience Very Late Relapses (VLRs) occurring ≥5 years after treatment initiation. Until recently, the issue of VLRs after chemotherapy or combined modality therapy (CT±RT) had been studied inadequately, in the context of small case series. In 2017, the German Hodgkin Study Group (GHSG) first reported on the incidence of VLRs after combined modality approaches, and specifically highlighted the linear pattern of risk of VLRs within 20 years after initial treatment. Our group validated the linear risk within extended follow-up time with the latest VLR recorded at 35.1 years. Notably, significant independent prognostic factors were established in our study including mixed cellularity histology, which may have clinical and biological implications. Finally, Andersen et al presented the incidence and characteristics of late lymphoid recurrences in patients with HL and explored the role of several risk factors, involving certain limitations though. In this mini-review we aim to provide additional information and a critical view on the subject of VLRs in classical Hodgkin lymphoma, based on the results of the recent hallmark studies.

Despite the excellent long-term outcome of patients with Hodgkin Lymphoma (HL), 20% of the cases will be primary refractory or will eventually relapse. Most treatment failures occur within the initial 2 years from diagnosis and thus, typically the disease is considered cured after a 5-year continuous first complete remission. However, very late relapses (VLRs), occurring ≥5 years after treatment initiation, are a non-negligible event and possibly comprise a distinct disease with unique biological and clinical characteristics.

The occurrence of VLRs in HL has been long recognized from 19851 and relapses recorded as case reports have occurred as late as 30-32 years after the initial diagnosis.2,3 Until recently, the issue of VLRs had been evaluated in rather small patient series including patients with variable definition of VLR, treated with very heterogenous approaches including RT alone and/or outdated chemotherapy.4-11 We started the study of VLRs in 2005 trying to qualify the risk and identify relevant risk factors.12 In 2017, the German Hodgkin Study Group (GHSG) first reported on the incidence of VLRs within the HD7-HD12 randomized trials, among patients treated with combined modality approaches.13 Our group, recently presented the results of a retrospective study with extended follow-up time, exceeding 20-years.14 Simultaneously Andersen et al, presented the results of their population-based study aiming to describe the characteristics of late lymphoid recurrences in patients with HL.15

In this mini-review we discuss various important points regarding incidence and risk factors for VLR, as derived from the critical comparison of these three studies and highlight the clinical and biological issues related to VLR.

Issues on the incidence of VLR

The incidence of VLR was not adequately described in the small patient series published before 2017 and in fact, it is characterized by considerable variability even among the various major studies published until now. The completeness of follow-up always remains of paramount importance when reporting on VLR. Additionally, the use of competing-risks analysis, considering death from any cause as a competing event to VLR, by GHSG and our study, is necessary to accurately estimated the incidence of VLR and produce robust results.

The different incidence rates of VLRs in various time-points among the three major studies is presented in Table 1. The GHSG reported 141 VLRs in an analysis of 4935 patients with classical HL (cHL) after a median follow-up of 10.3 years.13 Our long-term experience revieled 66 VLRs after a 13.8-year median follow-up in a series of 1143patients, including 978 cHL patients treated with anthracycline-based chemotherapy.14 Α striking observation in the two studies was the linear pattern of risk of VLRs within 20 years after initial treatment, first noted by the GHSG. We validated the linear risk by further extending this observation and demonstrating that the linear trend of VLRs continues beyond 20 years from diagnosis, up to 25 or even 30 years. Similar findings were observed when the analysis was restricted to patients treated with ABVD or equivalent regiments. This linear risk pattern is similar to the observations made in hormone-receptor-positive early-stage breast cancer.16,17 Whilst in breast cancer the development of delayed metastatic disease is almost always relapsing disease and not a new malignancy, the situation is different in HL, where a second primary HL cannot be excluded. However, the 84.5-fold higher risk of HL reported by the GHSG in 5-year relapse-free survivors compared to the general population argues in favor of the relapsing rather than “second primary” nature of late HL events.13

Our study reported slightly higher VLR rates than GHSG. However, nearly half of the patients in the German study (~45%) were treated intensively with various BEACOPP schedules ±RT, whereas 9% of the patients in our study were treated with MOPP or equivalent regimens (mainly before 1988). Hence, possibly BEACOPP-based strategies not only reduce early relapses but may reduce VLRs as well.

Andersen et al. reported 58 very late lymphoid recurrences in a cohort of 2424 patients of the Danish registry.15 However, among the 58 events, at least 10 were non-Hodgkin lymphomas including a composite HL/angioimmunoblastic lymphoma (cHL/AILT); interestingly our study also included a single case cHL/AILT as a VLR. Only 31/44 patients with primary cHL relapsed as cHL. The incidence of VLRs was significantly higher in nodular lymphocyte predominant HL (NLPHL) than in cHL. Notably, the cumulative incidence of VLRs in cHL patients of the Danish registry was much lower compared with our data and even with the GHSG. Although the maximum follow-up in the Danish series could have been 37 years (1982-2019), it was 25.5 years, and the most delayed relapse was seen at 18.9 years. In contrast, we observed the latest VLR at 35.1 years and recorded 8 cases of VLRs beyond the 20th year, including 4 occurring beyond the 25th year.14 Despite the appropriate methodology applied by Andersen et al. in this registry study deriving information from other validated sources as well, the completeness of follow-up may remain an issue. Thus, in order to critically interpret the estimates of the cumulative incidence of VLR the authors should have provided the number of patients at risk at each time point and also report how many patients among the initial patient population, had CR/CRu and follow-up time<5 years, as such patients were not at risk for VLR.

Various clinical, pathological and laboratory features have been assessed as potential risk factors by the older, moderately-sited series and the three major recent studies, as presented in Table 2. Increasing age remained unanimously a risk factor for late recurrences.13-15 Male gender and early stages were independent predictors of higher CI of VLR in the GHSG study.13

Our study highlighted the omission of radiotherapy from first-line treatment as a risk factor for VLR which remained significant in multivariate analysis after adjustment for clinical stage (HR:0.35, p<0.01). If VLRs are indeed more frequent in non-irradiated complete responders, the short- and mid-term results of recent randomized trials should be viewed with caution, because non-inferiority may not be valid in the long-term.18-22 Treatment with MOPP vs or equivalent vs anthracycline-based regimens was also associated with higher VLR risk in our study after adjustment for confounding factors (HR:0.49, p=0.024).14In this setting it seems that inferior treatment approaches hold higher risk of relapse and this comes in line with the high risk of VLRs in early-stage trials of the GHSG (HD7, HD10), in which patients were treated with the least intensive approaches (ABVDx2-4+RT or even RT alone).13

Andersen et al, reported lymphocytopenia as a significant independent risk factor for VLR (HR:5.55, p<0.001).15 Paradoxically in our study elevated ESR ≥50mm/h, which is strongly correlated with advanced stage and B-symptoms, was associated with a significantly lower risk of VLR (HR:0.46, p=0.08).14 This may be explained on the basis that elevated ESR represents biologically more aggressive disease, which may have a different biology related to primary refractoriness or earlier relapses. This hypothesis is supported by recent data on breast cancer, reporting that grade 1 patients with extensive nodal disease are at highest risk of VLR at 10-35 years.17

Histologic subtype was also explored as a potential risk factor. Andersen et al reported NLPHL as a significant risk factor with a frequency of VLR was 9%, as compared with 1.9% in patients with cHL (HR:5.1, p<0.001).15 This was not confirmed in our study, while GHSG excluded patients with NLPHL histology. However, the most remarkable finding, which was particularly highlighted in our study, is the emergence of mixed cellularity (MC) as a risk factor for developing VLRs. MC was associated with the highest VLR risk followed by NLPHL and finally other cHL subtypes, mainly nodular sclerosis (NS). The association between MC and the probability of VLR was independent from stage, age, ESR, chemotherapy regimen and use of RT (HR=2.84, p=0.001).14 This was further confirmed when the analysis was restricted to patients diagnosed after 1996 when the histologic classification was not accurate. Andersen et al also found that MC subtype was more likely to be complicated by VLRs but strangely, this was limited to female patients (HR: 5.36, p=0.014).15 A closer look into the GHSG data reveals that NS and MC accounted for 64% and 26% of 4794 patients with continuous CR versus 47% and 40% in the 141 VLRs.13 Although the relative risk was not formally quantified, this clear imbalance provides further support to the findings published by the Danish and our group.14,15 In retrospect, we investigated the gender-specific effect of MC (Figure 1) but the risk was higher in males than females. Also, to test for a differential effect of MC histology by gender among cHL patients, the interaction term was included in a Fine&Gray model and was not significant (Wald-test p=0.9315). Unexpectedly however we found a higher VRL risk in females with NLPHL. This discrepancy between our study and the Danish one may simply suggest that gender-related differences lack biological significance and appeared just by chance due to the low number of events per gender group. A combined individual-patient data analysis of the published studies would be of value to provide accurate estimates of the impact of each potential risk factor. 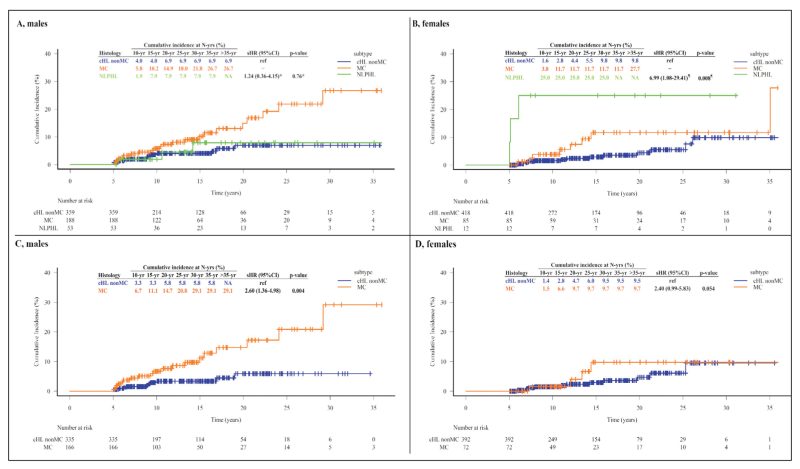 In our series independent adverse factors for VLRs were MC, age≥45 years, lower ESR<50 mm/h and treatment with chemotherapy only without RT.14 Although the risk was low for patients with none of these factors (19.6 % of all patients), the HR for those with 1 (44.3%), 2 (24.6%) or 3-4 (11.4%) factors was 2.68, 6.75 and 11.53 respectively. Thus, a sizeable patient subgroup carries a considerable risk of VLR, which may overweight the risk of treatment-related side effects. Practically, it appears that patients with MC or other multiple risk factors for VLR might require long-term surveillance for the detection of relapsing disease. Although the optimal surveillance procedures remain unknown, it is clear that interrupting follow-up after 5 years may not be prudent.

In conclusion, despite the rarity of VLRs, their clinical impact remains significant in the long-term. The linear pattern of relapse, their non-negligible cumulative incidence and the potential risk factors are implying that the optimal surveillance of patients with HL should be reconsidered. More studies with complete and thorough follow-up time are necessary in order to form new policies. Research should also focus in defining prognostic factors for the outcome and exploring the unique biology of VLRs.23