Acute Myeloid Leukemia (AML) is a clonal hematological malignancy characterized by the accumulation of blast cells in the bone marrow, peripheral blood or other tissue.1 It is a heterogenous disease clinically, morphologically and genetically. The requisite blast percentage for the diagnosis of AML is at least 20% myeloblasts, monoblasts/promonocytesor megakaryoblasts in the bone marrow. A diagnosis of AML is also established when the blast percentage in the peripheral blood or bone marrow is less than 20%, if there is an associated t(8;21)(q22;q22.1), inv(16)(p13.1q22), or t(16;16)(p13.1;q22) chromosomal abnormality or a PML-RARA fusion gene. Conventional karyotype has remained one of the most important prognostic factors in AML.2

The role of genetic alterations in AML has been emphasized by the 2008 revised WHO classification of AML when, for the first time, AML with molecular genetic changes have been incorporated as provisional entities, that is, as AML with mutated NPM1 and AML with mutated CEBPA.3 In the 2016 revised WHO classification of AML a new entity is introduced, which is AML with biallelic mutations of CEBPA, and a new provisional entity constitutes AML with mutated RUNX1. According to the 2017 ELN AML Recommendations,4 as far as NPM1 and FLT3 is concerned, patients with NPM1 mutation and FLT3-ITD with a low (<0.5) allelic ratio (FLT3-ITDlow) have a similar (favorable) outcome as patients with a NPM1 mutation but no FLT3-ITD, thus, both groups are now considered favorable. In contrast, AML with wild type NPM1 and FLT3-ITD with a high (>0.5) allelic ratio (FLT3-ITDhigh) has a poor prognosis and is placed in the adverse risk group.5

AML development is considered a multistep process that requires the contribution of at least two classes of mutations to evolve to full-blown leukemia. The “two-hit model” was first described by Gilliland and Griffin.6 It includes class I mutations that activate signal transduction pathways and allow a proliferation advantage on hematopoietic cells and class II mutations that affect transcription factors and primarily block hematopoietic differentiation.7.8 Many of the newly identified genetic alterations, such as those DNMT3A, TET2, IDH1, IDH2, NPM1, ASXL1, had not been classified because the consequences of these mutations were not yet fully identified and the term “unclassified” mutations was used for this category. Recently, Metzeler et al, reported the presence of several recurrently mutated genes in acute myeloid leukemiaby performing next generation sequencing and other high-throughput techniques.9 Most frequent mutations are those that lead to aberrant regulation of DNA methylation and hydroxymethylation (DNMT3A, TET2 and IDH1/2), altered messenger RNA splicing by the U2 complex (SF3B1, SRSF2, U2AF1), modified chromatin architecture (ASXL1, EZH2 and KMT2A) and transcriptional deregulation (CEBPA, RUNX1 and WT1).10

There was a great interest concerning the role of IDH1 and IDH2 in leukemogenesis around 2010 and a number of studies tried to assess the frequencies of the above mentioned mutations and to explore their association with clinical, cytogenetic, and molecular characteristics as well as with outcome in younger adults with AML. IDH mutations are usually observed in patients with intermediate risk cytogenetics, including trisomy 8 and normal karyotype AML. Additionally, they represent early genomic events in disease pathogenesis and evolution, since they are present in dominant clones and persist even after chemotherapy or at the time of relapse or disease progression.11,12 IDH1 mutations are less common than IDH2 mutations in AML and in MDS.13,14

One hundred and twenty-six (126) newly diagnosed AML patients (excluding M3 subtype) were retrospectively studied in one Hematology Department of Laiko General Hospital between 1995 and 2010. Medical records were reviewed for demographic and clinical data, FAB classification, karyotypic analysis, treatment strategies and outcome of the patients. Genomic DNA from pretreatment bone marrow was available for all the 126 patients and was analyzed for the FLT3, NPM1 and IDH1/IDH2 genes.

Detection of NPM1 mutations was performed by polymerase chain reaction (PCR) and fragment analysis.15,16 To amplify the exon 12 of NPM1, we used a fluorescently labeled forward primer 5-(dyeD4) TGTCTATGAAGTGTTGTGGTTCCTT-3 (Sigma-Aldrich) and a reverse primer 5-CGGTAGGGAAAGTTCTCACTCTG-3 (Sigma-Aldrich). DNA was amplified using the Hot Star Taq Plus Master Mix Kit (Qiagen). Fluorescent PCR products were subjected to capillary electrophoresis on denaturing polyacrylamide gel and analyzed by CEQ 8000 Genetic Analysis System (Beckman Coulter). Samples from healthy controls show one peak at 201bp. As all NPM1 mutations result in the insertion of 4 nucleotides, the mutated profile was defined by the presence of an additional peak at 204 bp.

Detection of FLT3-ITD mutations was performed by polymerase chain reaction (PCR) and fragment analysis as previously described.15,16 To amplify the exons 14 and 15 of FLT3, we used a forward primer 5-GCAATTTAGGTATGAAAGCCAGC-3 (Sigma-Aldrich) and fluorescently labeled reverse primer 5-(dyeD3): CTTTCAGCATTTTGACGGCAACC-3 (Sigma-Aldrich). Samples from healthy controls show one peak at 329bp. The amplicons with a size greater than that of wild type were interpreted as positive for the ITD mutation. The FLT3-ITD mutant allelic burden was calculated as the ratio of the area under the curve of mutant and wild-type alleles (mutant/total FLT3).

DNA was amplified using the Hot StarTaq Plus Master Mix Kit (Qiagen) and PCR products were analyzed by agarose gel electrophoresis. Samples with wild type alleles give a 502-bp product. The amplicons with an extra lower band than that of wild type, were interpreted as positive for one of the specific IDH1 mutations. In order to further characterize the mutation we repeated the amplification of the DNA sample with 6 separate PCRs, using each time one of mutant specific forward primer and the common reverse.

Furthermore, in patients that received intensive chemotherapy with or without allo-SCT (instead of palliative care) for AML, including standard treatment “3+7” as induction therapy and cytarabine-containing regimens as consolidation, IDH mutation status was correlated with the occurrence of death during induction therapy, as well as, with the resistance of the disease to the treatment.

The impact of isolated IDH mutations has been extensively studied especially in patients with normal cytogenetics. In order to investigate the impact of the IDH status on RFS and OS, survival analysis was restricted to patients that treatment approach is not considered “standardized”. Therefore, survival analysis was studied to the group of patients that received standard chemotherapy for AML while not dying during induction therapy, whose disease was not characterized as primary refractory and were not intended for allogeneic stem cell transplantation a priori. The last category includes those patients who were scheduled for allogeneic stem cell transplantation at diagnosis and proceeded at first complete remission.

The Chi square test was used for correlations between categorical variables. Cox models were used to identify prognostic values. Kaplan-Meier method was used to estimate the distribution of RFS and OS. All statistical analyses were performed using SPSS package for Windows.

Additionally, survival analysis in the subgroup of patients mentioned above, revealed that IDH status is not related significantly with RFS (Figure 1) or OS (Figure 2) in this patients’ subgroup (p=0.753 and p=0.852 respectively). 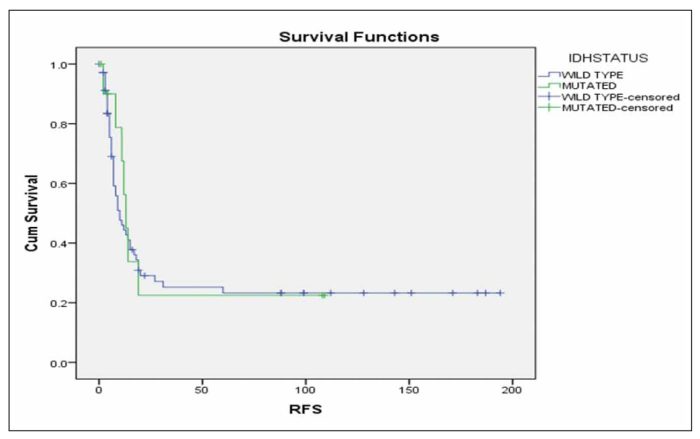 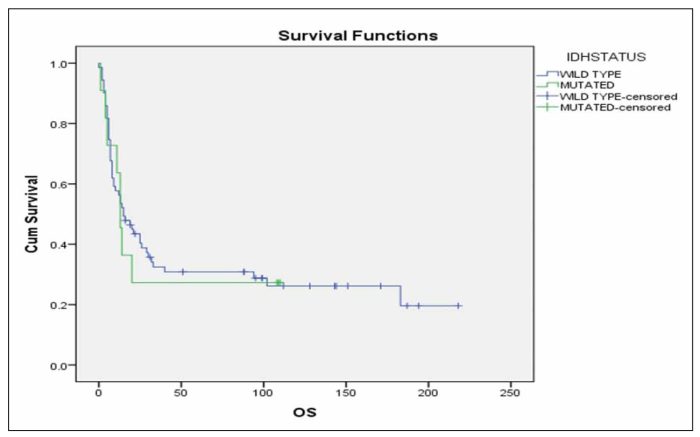 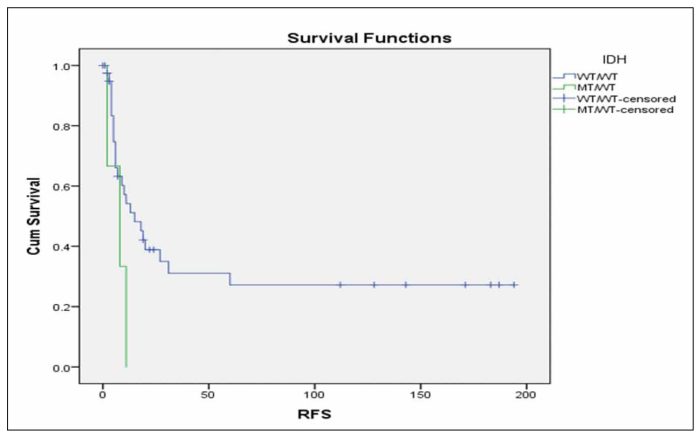 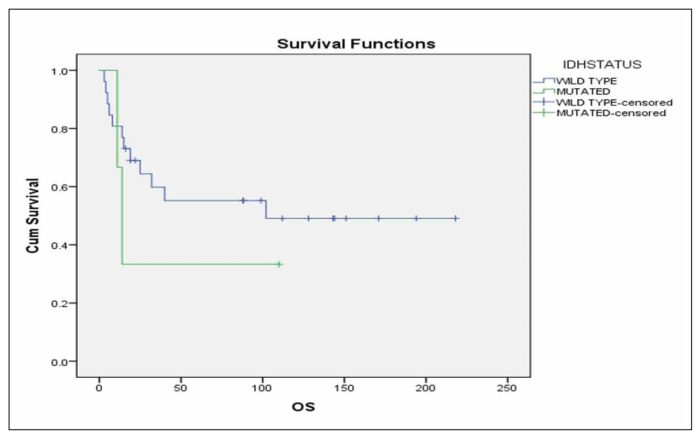 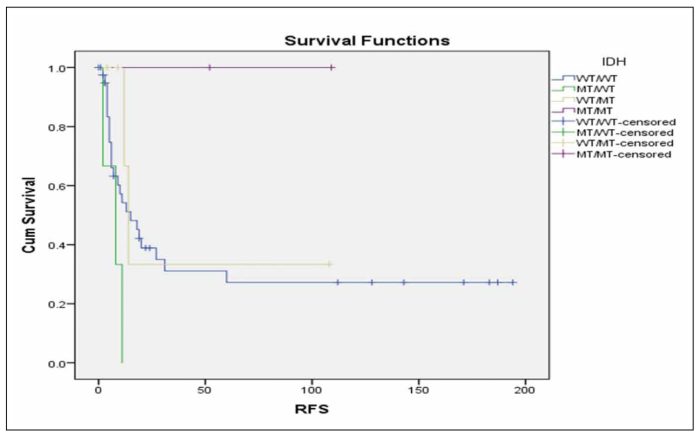 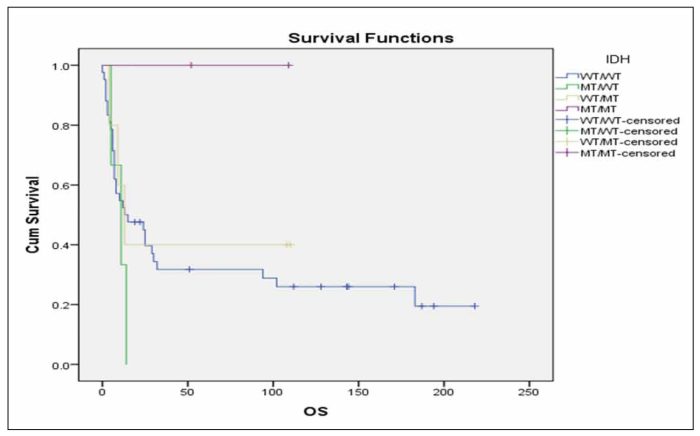 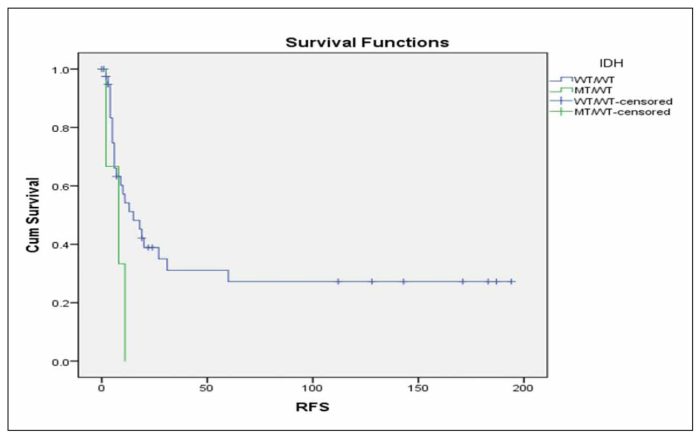 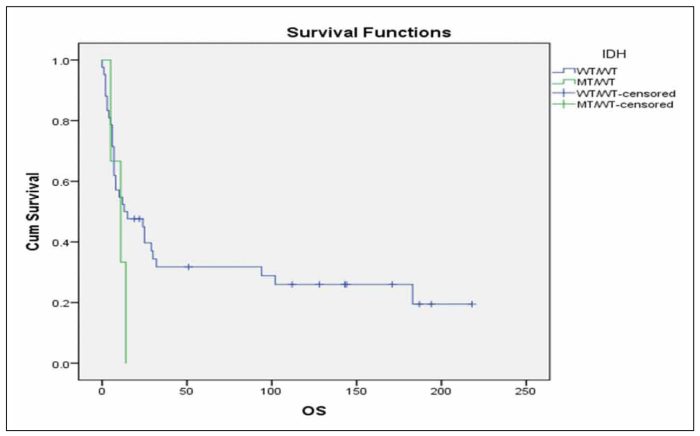 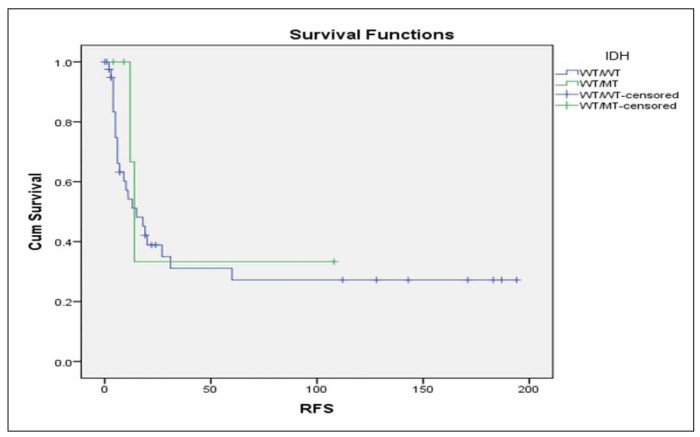 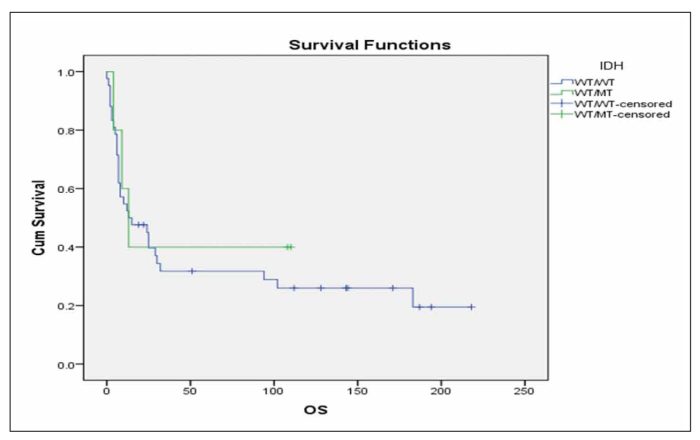 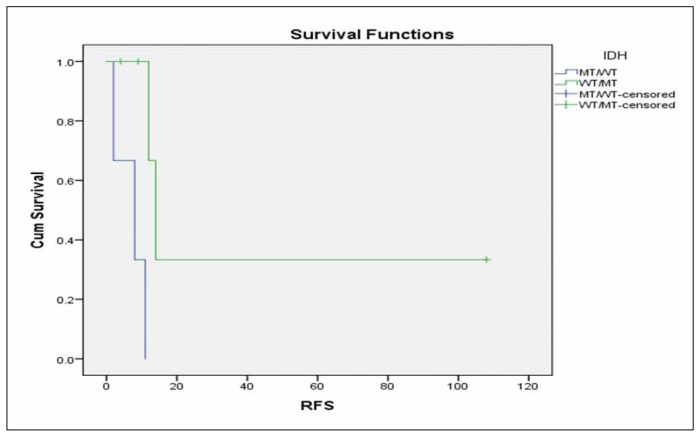 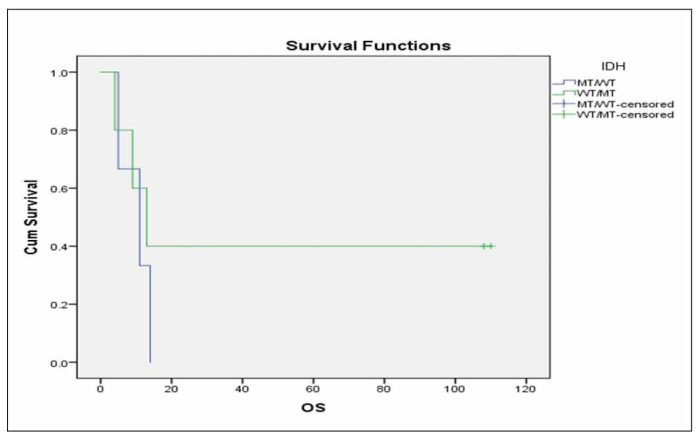 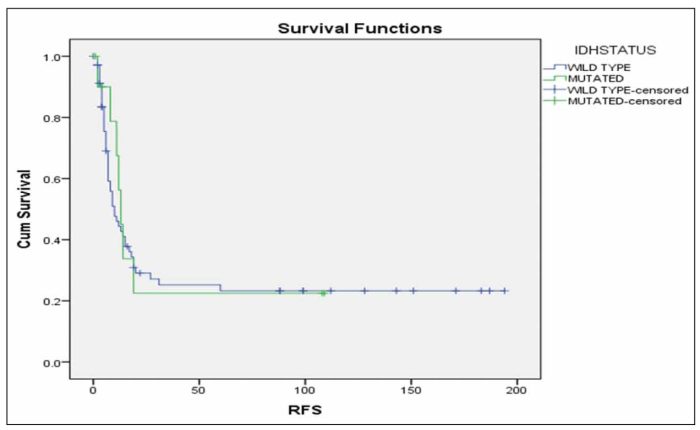 We compared separately IDH2 mutated patients vs wild-type and we observed that patients with mutations IDH2 R172 and IDH2 R140Q presented the most favorable prognostic impact (Figure 13, p=0.188).

In this retrospective study of οne hundred and twenty-six 126 newly diagnosed patients with AML, we evaluated the frequency of IDH mutations, their association with other patients’ characteristics, as well as, karyotypic and molecular data and additionally their impact on RFS and OS.

Earlier studies of Pascha et al19 had shown that IDH mutations were associated with older age, lower WBC, higher platelets, cytogenetically normal (CN) AML and NPM1 mutations, in particular with the genotype of mutated NPM1 without FLT3-ITD. In patients with CN-AML with the latter genotype, IDH mutations adversely impacted RFS and OS, whereas outcome was not affected in patients with CN-AML who lacked this genotype. In CN-AML, multivariable analyses revealed a significant interaction between IDH mutation and the genotype of mutated NPM1 without FLT3-ITD (the adverse impact of IDH mutation was restricted to this patient subset). All but one IDH1 mutation caused substitutions of residue R132, IDH2 mutations caused changes of R140 or R172.

Papaemmanuil et al21 have reported that although the number of patients in their IDH2R172 study subgroup was small, the long-term outcomes were broadly similar to those in patients with NPM1-mutated AML. Furthermore, they stated that IDH2 should be considered along with TP53, SRSF2, ASXL1, DNMT3A, for incorporation into prognostic guidelines because they are common and exert a strong influence on clinical outcomes.

Green et al22 reported in 2011 for the first time the favorable outcome associated with an IDH2R140 mutation. When the results were stratified according to NPM1 genotype, relapse was reduced in IDH2R140 cases both with and without an NPM1 mutation.

In our study we observed that IDH mutations did not seem to significantly affect RFS and OS, concerning the group of patients that received standard treatment (instead of palliative care) for AML, that did not die during induction therapy, that were not intended for allogeneic stem cell transplantation a priori and that their disease was not characterized as primary refractory. When we performed multivariate analysis, FLT3-ITD and age ≥60 years were found to be independent prognostic factors for RFS and OS in this group of patients. We further analysed the impact of isolated IDH mutations on RFS and OS, in subgroup of patients with the aforementioned characteristics, with normal karyotype, irrespective of age, and we observed that when IDH1 mutated patients compared to patients with IDH2 mutations or unmutated IDH status ones, they seemed to have an inferior RFS as well as OS, although not statistically significant. As far as patients with IDH2 mutations is concerned, we observed that it seems to have favorable outcome in terms of RFS and OS (Figure 10, p=0.626), although the statistical significance is not significant. When we compared only IDH1 mutant patients to IDH2 ones, we observed significantly superior RFS in IDH2 mutant patients. Additionally, when we compared IDH2 mutant vs wild-type patients, the most favorable prognostic impact was observed in IDH2 R172 mutant patients, followed by IDH2 R14OQ mutant ones.

In conclusion, although the frequencies of our study are relative small, however we could make the statement that we observed a positive impact of IDH2 R172 and IDH2 R14OQ mutations in our study group, statement in agreement with all above mentioned studies.

Screening for IDH1 and IDH2 mutations will be soon applied to AML patients at presentation or relapse, due to availability of recently FDA approved IDH1 inhibitor ivosidenib, as the first treatment of adult patients with relapsed/refractory AML and an IDH1 mutation, as well as adult patients with de novo IDH1 AML unfit for chemotherapy.22 Enasidenib, has recently been FDA approved, as the first oral IDH2 inhibitor, in relapsed AML patients carrying this mutation.23.24