In large areas of the tropics, the problem of feeding the populations and maintaing an adequate status of nutritional health is a serious one, especially that affecting young children. Haematological problems related to the absence of specific nutrients include iron, vitamin B12, and folic acid deficiency. A poor diet usually is not limited to just one nutritional component. Other avitaminoses and protein-calorie malnutrition may also cause haematological abnormalities (iron is immobilised in the reticuloendothelial system in the anaemia of protein-energy malnutrition). The nutritional deficiencies in many cases are complicated further by additional stress imposed by multiple parasitic infections, such as intestinal helminthiases (blood loss), malaria (haemolysis, dyserythropoiesis), tuberculosis (anaemia of chronic disorder, dyserythropoiesis), and HIV (anaemia of chronic disorder, dyserythropoiesis).1-4

Anaemia in the tropics:

Chronic kidney disease is very common in the tropics; patients often present late, with severe anaemia. In tropical countries, iron deficiency, worm infections and malaria are less common in an urban adult population but may have to be considered in other patients, in particular children, pregnant women or in the rural poor.1-4

The diagnosis of pure iron deficiency anaemia and megaloblastic anaemia is relatively easy from the appearances of peripheral blood and bone marrow.5-8 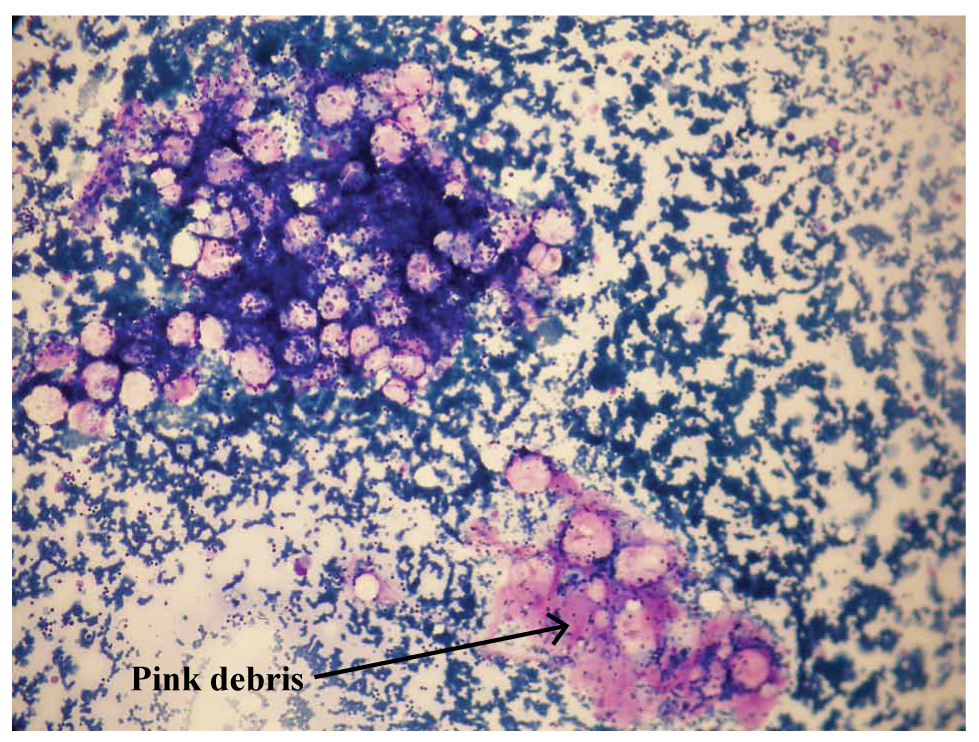 Iron deficiency anaemia in the tropics:1-4

As normal red cells contain iron as haemoglobin 1 mg per 1 ml, chronic blood loss can lead to negative balance and depletion of iron stores. The aetiology of iron deficiency is as in non-tropical areas (e.g. menorrhagia, aspirin ingestion, peptic ulcers, carcinomas) plus causes common in the tropics including chronic parasitic infection by Ancylostoma duodenale and Necator americanus (hookworm anaemia), Schistosoma species (bilharzial anaemia), and Trichuris trichiura infection, with or without accompanying eosinophilia. Colon cancer and diverticulosis are less common causes of iron deficiency in tropical Africa than in western countries. 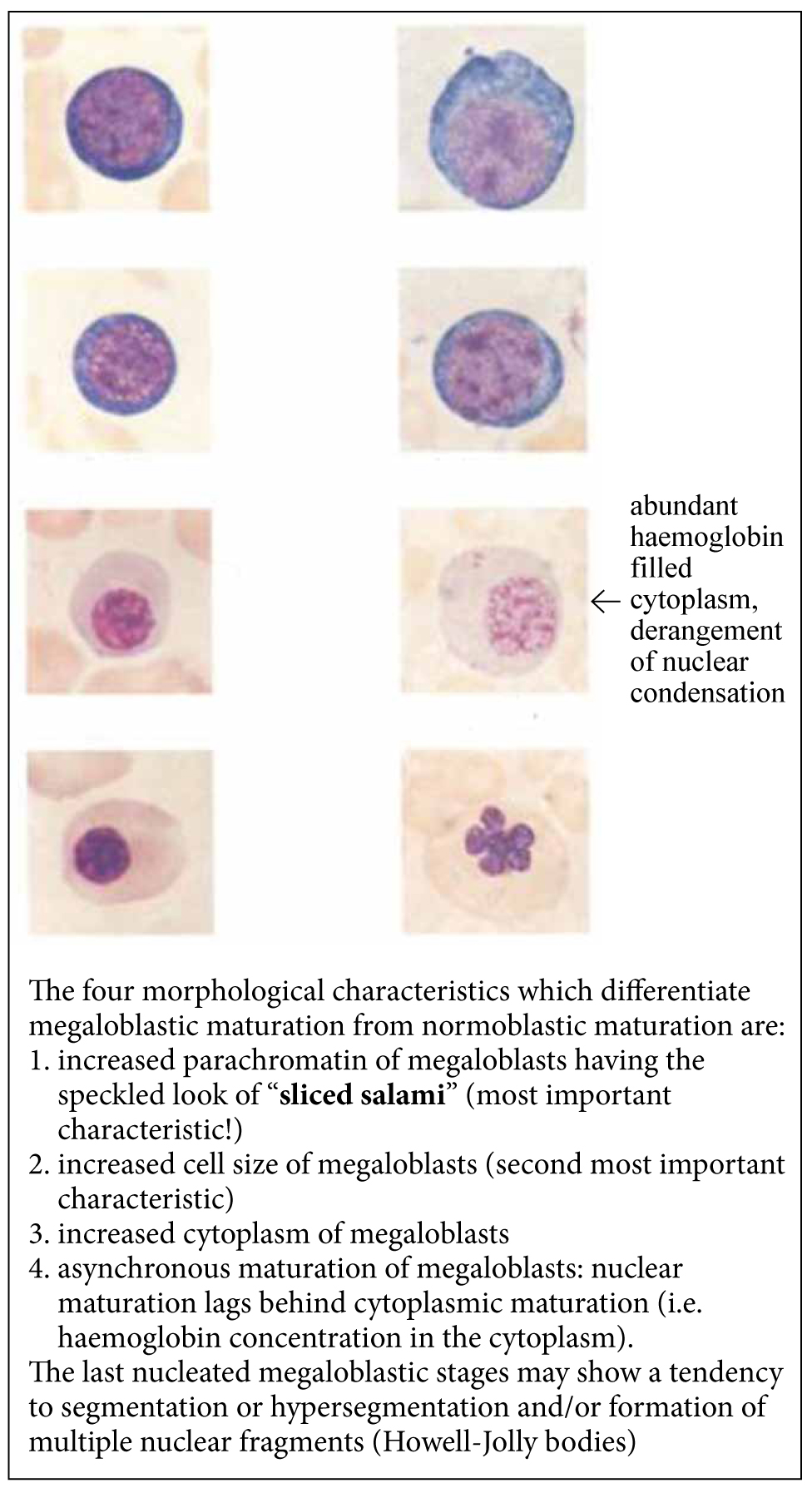 A. duodenale (not to be confused with Ancylostoma caninum and A. braziliense which cause cutaneous larva migrans) hookworms ingest, detach, and digest the duodenal mucosa causing blood loss and/or bleeding. Depletion of iron stores depends on (1) the daily absorption of iron, (2) the size of the body’s iron stores, and (3) the intensity of the hookworm infection i.e. the parasite burden. That is why hookworm anaemia is seen mainly in children and pre-menopausal women (Figure 3). The mechanism of iron deficiency anaemia in T. trichiura is due to inflammation of the colon and blood loss from the inflammed mucosa (T. trichiura infection is prevalent in Central America and in South-East Asia e.g. Malaysia). Iron deficiency anaemia caused by Schistosoma spp. is due to chronic blood loss in stool (chronic Schistosoma colitis, colon polyps, and portal hypertension) and/or in urine (haematuria in S. haematobium).

For investigation of iron deficiency anaemia in migrants from tropical areas especially children and young women, even without gastrointestinal complaints (diarrhoea, abdominal pain, and nausea) or eosinophilia, you should request microscopical examination of stool (or be more pragmatic and consider a trial of albendazole!).

Remember: iron deficiency passes through three stages. In the first stage, iron depletion, iron stores are reduced, but haemopoiesis remains unaffected: serum ferritin is below normal and staining for iron in a bone marrow aspirate shows scanty (1+) or zero iron in the macrophages of a cellular fragment; serum iron is low normal, serum transferrin raised and its percentage saturation reduced within the normal range. In the second stage, iron-deficient erythropoiesis, iron stores have been exhausted: serum ferritin is reduced further, iron is absent from the bone marrow and there are no sideroblasts; serum iron and transferrin saturation are below normal and red cell Zn protoporphyrin is raised; the Hb is likely to be within the normal range or there may be a slight normochromic anaemia. With further depletion, iron is not available for haemoglobin synthesis, and iron deficiency anaemia develops.

In iron deficiency, transferrin saturation is <16% in adults and <14% in children. In contrast, in anaemia of chronic disorders and in protein-energy malnutrition, although saturation of transferrin is decreased, it remains >15%.

In typical α-thalasaemia οr β-thalassaemia trait (common in the tropics), the red cell count is higher (normal-high or >4.9×1012/l), there is less anisocytosis (normal RDW or RDW<18), greater microcytosis, and less hypochromia (normal MCHC) than with iron deficiency. From these characteristics are derived several formulae to differentiate the two conditions; i.e. the Mentzer index:

MCV (fl): Erythrocyte count (×1012/l)
It is typically <13 in β-thalassaemia; in iron deficiency it is >13. However, a Mentzer index between 11-13 may fall into the zone of uncertainty. Another useful formula that could distinguish thalassaemia trait from other microcytic anaemias is England and Fraser’s discriminant function (D.F.).11-13

The presence of basophilic stippling and a large number of target cells are typical characteristics of β-thalassaemia ≠ iron deficiency anaemia. β-thalassaemia should also be considered if there is no response or incomplete response to iron supplementation. Typical iron studies in iron deficiency anaemia include: MCV<80 fl, serum ferritin <20 ng/ml, low iron (<65 μg/dl), and high TIBC (>400 μg/dl).

The aetiology of megaloblastic anaemia is as in non-tropical areas plus a common cause in the tropics is malabsorption of folic acid resultsing from tropical sprue and from acute or chronic intestinal infections (especially giardiasis).

Note: folate is found in green vegetables and fruits. Folic acid deficiency can result from decreased intake, impaired absorption, and increased utilisation of folate, although the commonest cause in the tropics is dietary insufficiency.

Tropical sprue (or post-infective tropical malabsorption) is an important cause of megaloblastic anaemia in the tropics.3,16,17 It consists of chronic diarrhoea (>3 weeks), steatorrhoea, and folic acid deficiency (macrocytosis with or without anaemia) in people who have returned from tropical areas particularly India (Figure 4). 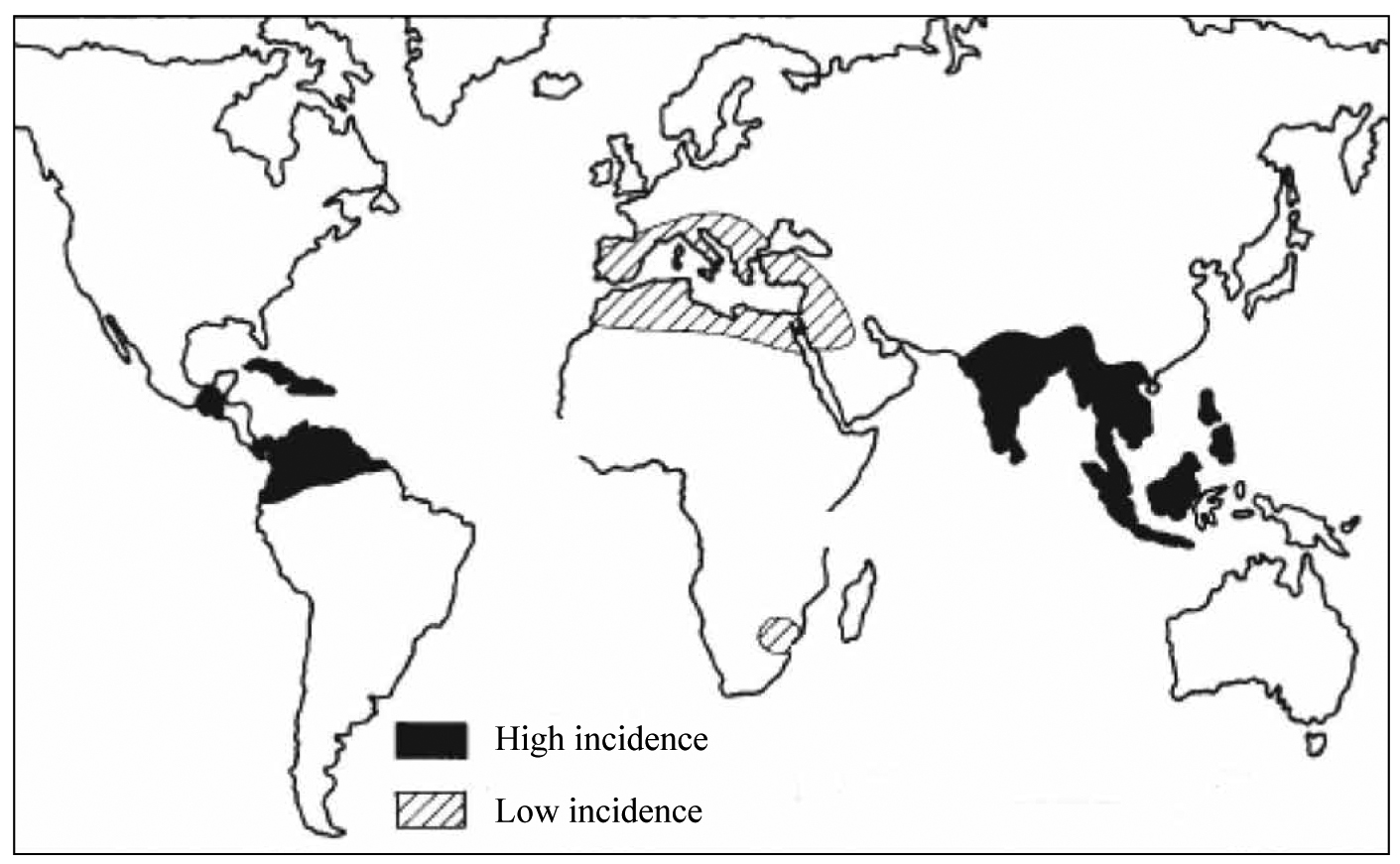 Tropical sprue is rare in tropical Africa, but has been reported from North Africa (Egypt). Fever is not part of the picture. It is probably due to colonisation of jejenum by aerobic enterobacteria E. coli, Klebsiella, and Enterobacter. Folic acid deficiency plays a central role in the pathophysiology. The bone marrow is normocellular with megaloblastic change, which is more obvious in the granulocytic series (giant metamyelocytes). Iron, serum ferritin, vitamin B12, albumin, electrolytes, and fluid balance are usually unaffected. 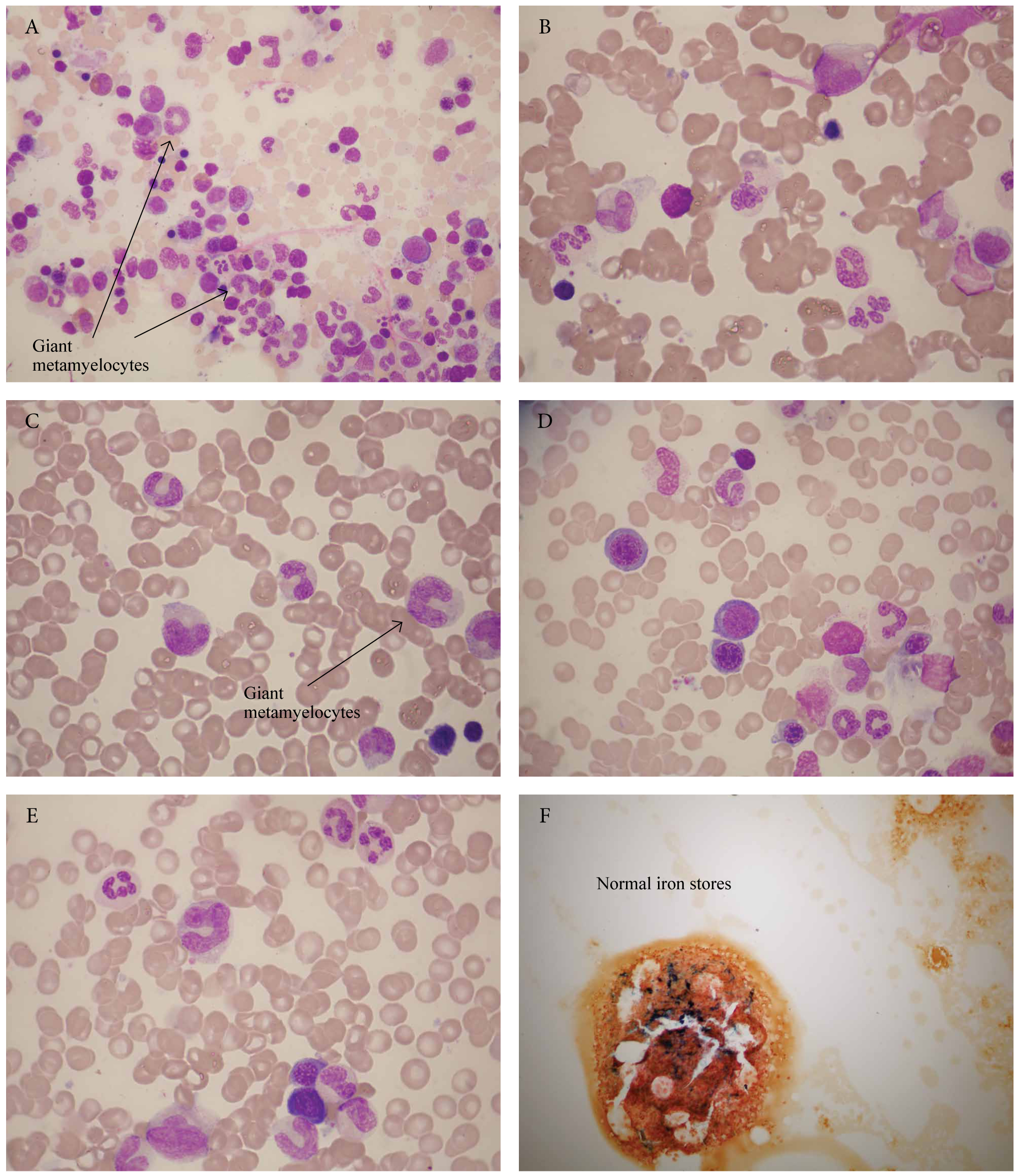 The differential diagnosis of tropical sprue includes giardiasis (giardiasis is the parasitic infection most commonly associated with malabsorption: acute diarrhoea due to Giardia causes a malabsorption of folic acid, whereas about half of the patients with chronic giardiasis have impaired absorption of vitamin B12 due to utilisation of the vitamin by the parasite and bacterial overgrowth of the bowel), Strongyloides (the second most common parasite associated with malabsorption), Capillaria philippinensis, immunoproliferative small intestinal disease (IPSID), pellagra, and non-tropical conditions (e.g. Crohn’s disease, Whipple’s disease, coeliac disease, common variable immunodeficiency). In immunocompromised patients (e.g. HIV+, bone-marrow or solid organ transplantation) à also consider CMV, Cryptosporidium, Microsporidium, Cyclospora, Isospora, and lymphoma.2-4,18-21

[1]       Megaloblastic anaemia can be masked by co-existing iron deficiency anaemia or thalassaemia. The characteristic features of megaloblastic erythropoiesis are shown in Figure 2.8

Haematological Malignancies in the Tropics